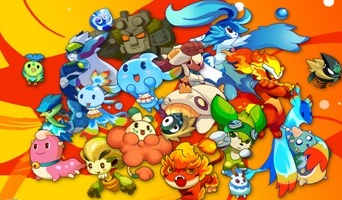 (Ào lā xīng), also known as AOLA, is a Chinese children's browser online game developed by Guangzhou Beioo Info Corporation (Also known for Aoqi Legend) and released on July 16, 2010. The game is a Mons MMORPG-like Adobe Flash browser game with educational elements and taking directly from Pokémon in gameplay (along with its rivals.
Advertisement:

Aola Star has three default types of heroes in which each can be played and customized. Players catch and raise creatures known as Yabis for various uses, especially battling. They can explore the constantly updating universe to undo the damage done by an evil organization called the Dark Fleet, lead by Darst, and find space crystals obtained by finishing quest chains in each world. Later updates have a new story-line revolving on a fox-like creature named Kiki and the player journey with Kiki while facing another group of enemies. Players raise not only Yabis but also a creature called HELLO. They can also do group activities or play mini-games.

The game is officially released in China and Taiwan with a very strong playerbase and won few awards, but the game is pretty much unknown outside of these nations.

Due to its success, it had spawned several merchandise, such as a trading card game and other toys. An animated CGI film was released on July 2015.