This is the character page for Osomatsu-san. For Osomatsu-kun, go here.

Tropes Applying to All the Sextuplets 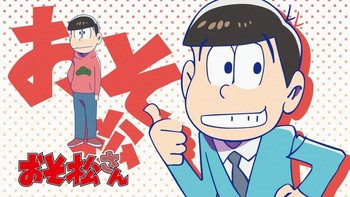 The oldest and leader of the sextuplets. Despite being in his early twenties, he has the mentality of a sixth grader. 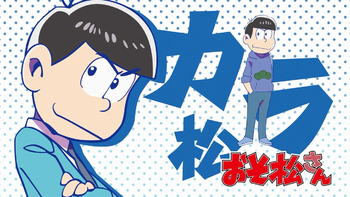 The second oldest Matsuno sibling. He is a narcissist obsessed with appearing cool to others. 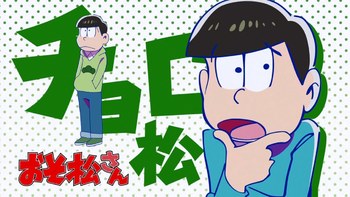 The third eldest sibling of the group. He is The Straight Man for his brothers' antics, and is also an idol otaku. 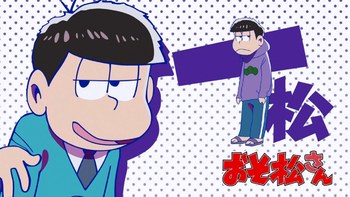 The fourth oldest brother. He is a rather lazy and unmotivated man with an affinity for cats. 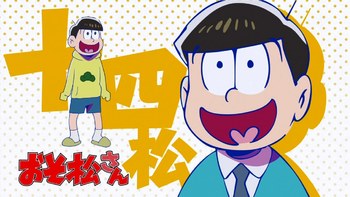 The fifth born son. He's the energetic goofball of the group and loves to play baseball. 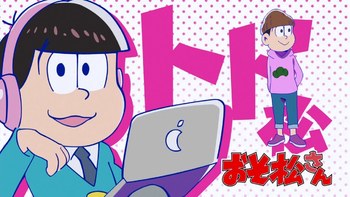 The youngest out of the sextuplets. He is an effeminate man and the most socially adept of the brothers. 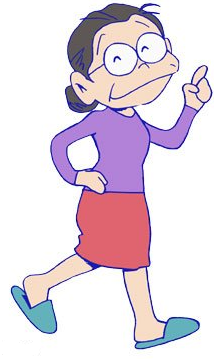 Mother of the sextuplets.

Father of the sextuplets.

The same old con artist who still claims to be from France. Iyami resents how he's no longer the Breakout Character he used to be, and sometimes tries to get back into the spotlight with little success.

The Matsuno brothers' former childhood rival, who now runs an oden stand. He's mellowed out considerably over the years and doesn't antagonize the brothers as much, though he still gets on their case about not paying their tab.

The girl who the Matsuno brothers have been crushing on since childhood, despite how she very obviously doesn't want to date any of them. She strives to be an Idol Singer in order to gain popularity.

Once a childhood acquaintance of the Matsuno brothers and occasional minion of other characters, Hatabou appears to not have aged at all. However, he's surprisingly good at making money. 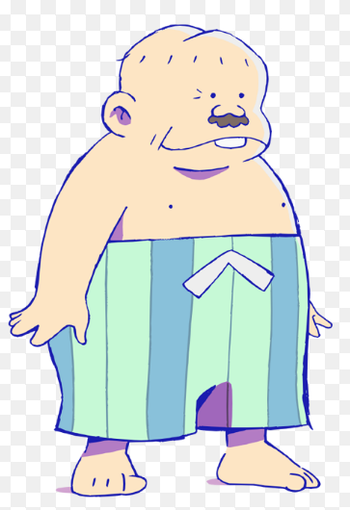 Dekapan is mostly unchanged from his character in -kun, continuing with his role of making various inventions and keeping items in his large pants. 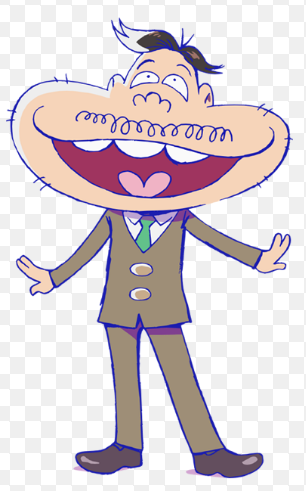 Mostly the same character as he was in -kun, but this time around he tends to show bizarre behaviour and otherworldly abilities. 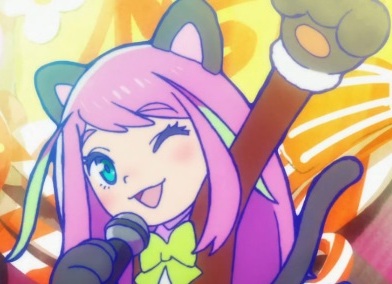 A cat-themed idol singer that Choromatsu is a fan of.

The Riceballs
Voiced by: Kazutomi Yamamoto
A pair of semi-identical robots that first appear in Season 3. They observe Akatsuka Ward (and in particular the cast) and make comments on what should and shouldn't be allowed in it. Named by Osomatsu as "Shake" and "Ume" (or "Salmon" and "Plum"), they are soon coined as the Riceballs for their facial features. 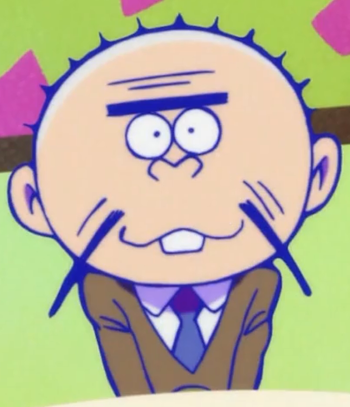 A strange man who keeps mysteriously showing up. 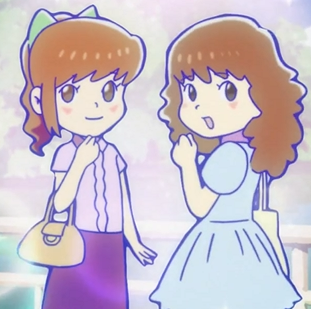 A pair of girls who frequently appear as either Todomatsu's acquaintances or the objects of the brothers' fleeting romantic interest. Aida is the one with curly hair and Sachiko is the one with the ponytail. 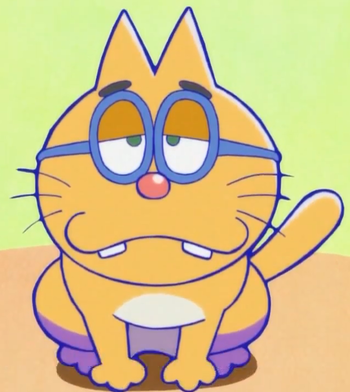 A cat that receives the ability to speak and reveal a person's true thoughts. 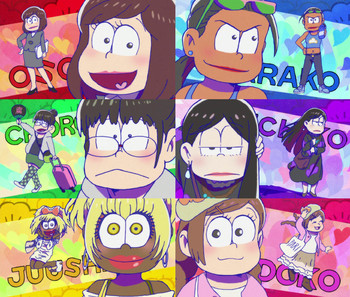 A group of six friends who are set up to be distaff counterparts to the Matsuno sextuplets. Despite looking quite alike, they're not related to each other at all. 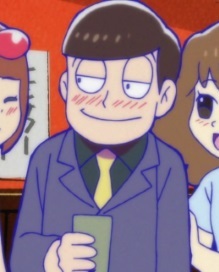 Sanematsu
Voiced by: Daisuke Ono
A miserable middle-aged office worker who shows up at least once a season.
Eitarou 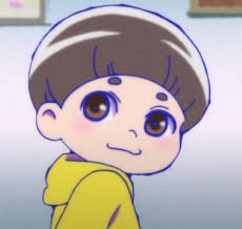 Voiced by: Yumiko Kobayashi
A young boy who Jyushimatsu befriends in "The Eitarou Family". He steadily grows to idolize Jyushimatsu, which causes his mother to worry about him.
The Ugly Flower Fairy
Voiced by: Kimiko Saito
First appearing in Season 1 episode 15 as Karamatsu's experiment Gone Horribly Wrong, she takes up new roles in subsequent appearances. 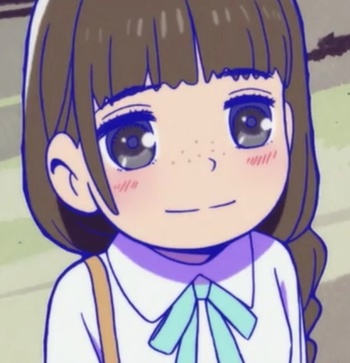 A young woman that Jyushimatsu befriends after she saves him from drowning. The two of them start seeing each other for a month.

The Flower Girl
Voiced by: Yuu Wakui
A young flower sprite that decides to hang out with Chibita because he watered the flower she sprouted from.
Kamimatsu/Godmatsu 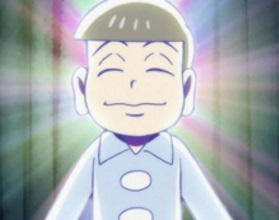 Voiced by: Kenji Nojima (Japanese), Johnny Yong Bosch (English)
The essential goodness of the sextuplets that's been gradually collected over the course of -San before manifesting in physical form.
Akumatsu/Evilmatsu 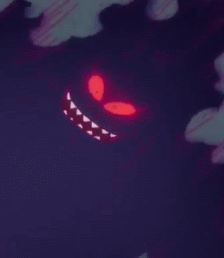 Voiced by: Tomokazu Sugita (Japanese), Patrick Seitz (English)
The collected darkness and malice of the Matsuno siblings, which manifests over their frustration and jealousy of Godmatsu finally hitting a breaking point.
Coachmatsu 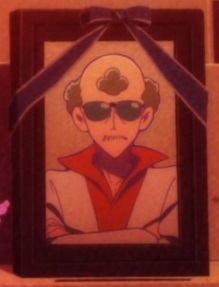 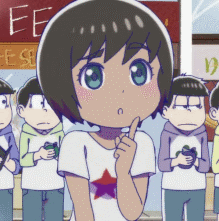 Voiced by: Kanae Ito
A cute tomboyish girl who moves next door to and befriends the Matsunos in "The Cutie next Door", earning Totoko's jealousy.
Okiku-chan
A blind little flower girl who Iyami helps in "Iyami, Alone in the Wind".