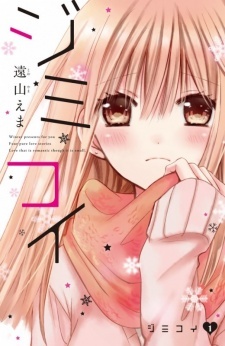 It made its debut in Chapter 9.5 of Ema Toyama's other work, Missions of Love, in the Nakayoshi Lovely magazine.

Wakana Nakatani loves plain boys — specifically, Kagano, an aloof, intelligent, but overall "plain boy" in her class. However, she never acts on her feelings, as plain boys typically reject her for "not being their type of girl," as Wakana has "flashy" blond hair.

But after accidentally slipping out her feelings in front of Kagano, it looks like her bad luck with plain boys might be changing...

It was later published as a one-shot compilation named after it along with three other Ema Toyama one-shots: Columbus no Yuutsu (about a girl called Shiono who appears collected and smart, but is actually pretty bad at studies, and what happens when her secret is discovered by her classmate Satou), Mimimoto ni Furu Kimi no Koe and Gojouzaka-san Chi no Kirei na Himitsu.

This one-shot compilation provides examples of: