Literature / The Mouse and His Child 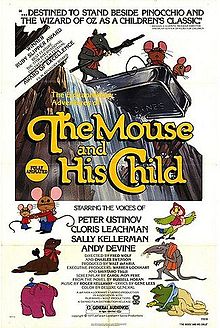 A novel by Russell Hoban, The Mouse and His Child, published in 1967, tells the story of a wind-up toy mouse-and-child pair and their friends the Tin Seal and the Elephant in a small-town toy shop. The central point of the novel is the nature of free will and self-determination; in the toy shop, the toys are told that they can only do what they're "wound" to do, but Mouse and Child want to be "self-winding" and determine their own future, and live with their friends as a "family" instead of being sold or disposed of.

After an accident due to a cat, Mouse and Child are thrown out of their owners' home and sent to the town dump, where the story actually begins and we meet the Big Bad, Manny the Rat, who represents the dangers out in the world beyond the toy shop, enslaving wind-ups to plunder for him and his gang of rats. As Mouse and Child travel the countryside just outside the town, they discover several characters that help them on their quest, including a kindly Muskrat and a Frog who can see the future, but also encounter other dangers such as militant shrews and hungry seabirds. Eventually, Mouse, Child, Elephant and the Tin Seal reunite and defeat Manny's gang, and Mouse and Child's dream of a family comes true.

The novel was adapted into an animated movie in 1977, bankrolled by Sanrio (the people behind Hello Kitty) and Charles M. Schulz Creative Associates, and animated by Murakami-Wolf (the same studio that made The Point and the 1980s Teenage Mutant Ninja Turtles series), with a score by composer Roger Kellaway (probably best known for the closing theme of All in the Family; he had just been nominated for an Oscar for the 1976 version of A Star Is Born). It flopped at the box office, but was popular years later on cable and pay-TV services, especially HBO, and was released on VHS in the early 1980s. It hasn't been released on DVD, but the whole movie is available on YouTube.

Just like Watership Down, which was popular at the same time, it's proven to be a rich source of Nightmare Fuel; in fact, TV Guide listings in the late 1980s warned that it "may frighten younger children."

The Mouse and His Child provides examples of the following tropes:

Alternative Title(s): The Mouse And His Child