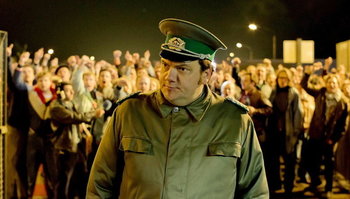 Bornholmer Strasse (aka Open the Wall) is a 2014 TV movie from Germany directed by Christian Schwochow.

Berlin, November 9, 1989. Harald Schafer is the commander of the Bornholmer Strasse crossing point of the border between East and West Berlin—namely, the Berlin Wall. It's been a tumultuous year in the Eastern Bloc, but it's a quiet night at the station, with the biggest business of the evening being a stray dog that wanders into the border crossing. Quiet, that is, except for Harald's constantly rumbling insides, which keep forcing him to the toilet with diarrhea.

The quiet night ends when an East German official named Günter Schabowski holds a press conference to announce a more liberal policy for allowing East Germans to visit the west. The idea was that the East German government would issue exit visas and tourist visas in a strictly controlled manner, but Schabowski, having not read the speech in advance, instead implied that all restrictions on travel to the west would be lifted, and when he was asked when, said "Immediately."

Harald and his men watch this announcement on the TV and wonder what it means. It doesn't take long to find out. A few curious East Berliners show up at the gate, taking the evening press conference as an announcement that the border has been opened. Then a few more. Then more. Then a lot more. Soon thousands of people are thronging the border post, booing and heckling the guards, chanting "Open the gate!" As the situation grows tenser by the minute, a stressed-out Harald has to decide what to do.