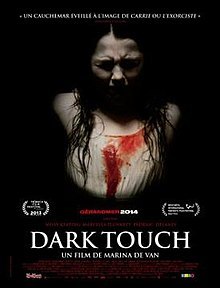 Dark Touch is a 2013 Horror film set in Ireland. Niamh, in a panic, runs to a neighbor's house, claiming that something horrible has happened at her house, that there's something evil there. Niamh is bruised and bloodied by running through the forest with nothing on but a night gown, and the neighbors, Nat and Lucas, are concerned, but when Niamh's parents arrive and explain that Niamh has been suffering nightmares about the house, they accept the explanation. Later, Niamh has a night-time visitation by something that sounds like her parents, after they have put her to bed, and something happens, causing things to fly around the house, resulting in her parents' death and the house catching fire. Niamh hides from the fire in a cabinet, with her infant brother, and is found by the firefighters alive, but her brother has suffocated. Nat and Lucas take her in, but Niamh's troubles haven't ended because bad things are still happening around her...

No relation to the Dark Touch novels.