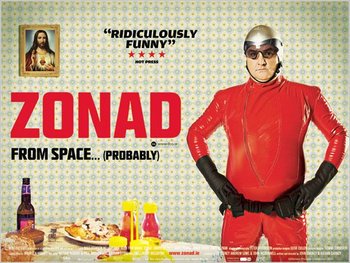 Zonad is a 2010 Irish movie directed by brothers John and Kieran Carney, concerning a small rural town on the west coast of Ireland where, following the passing of a comet, an extra-terrestrial visitor has taken up residence in the Cassidy's household. He eats all their food, drinks all their booze, is loved by all, and works his way through pretty much everything female he lays his eyes on. Things couldn't be better.

Too bad he's actually an escaped convict. And too bad his fellow escapee isn't far behind him, quite angry at being abandoned in the woods for three days.

Also in the mix is the love triangle between Zonad, Jenny Cassidy and Guy, Jenny's ridiculously apple-pie-American boyfriend, and the supporting cast of a sadistic cop, a crazy german scientist, an entire town of gullible fools and... Bonad.

The film is a pastiche of 50s alien movies, from the hairstyles to the interior decor, to the use ridiculously bad background-projection for scenes in transit. It takes numerous silly tropes to their extreme and plays them completely straight, the teenaers in the village are all ridiculously old, the townspeople ridicuously welcoming of an alien, and then ridiculously sudden to switch to an angry mob.

The film does to 50s alien movies what Shaun of the Dead does to 70s zombie movies. Not a rip-off though, it's an extension of a short that was made in 2003.

During it's Irish theatrical run Zonad was proceeded by an unrelated short film (a very common practice with Irish movies). Fittingly, the short preceeding Zonad was a deliberately bizarre parody - Moore Street Masala, the first ever Bollywood film made in Ireland.