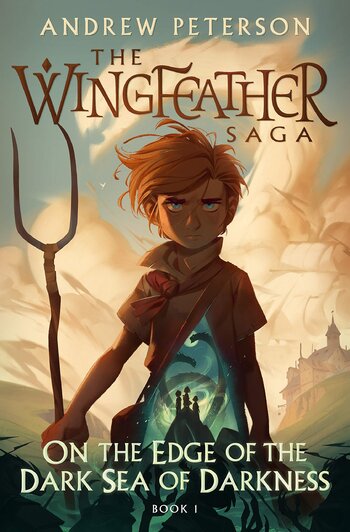 The Wingfeather Saga is a young adult fantasy book series by Andrew Peterson. The series consists of four books, On the Edge of the Dark Sea of Darkness, North! Or Be Eaten..., and The Monster in the Hollows, and The Warden and the Wolf King.

Our story begins in a little town called Glipwood in the land of Skree, which was long ago invaded by the vicious Fangs of Dang, evil lizard-like humanoids who enslave and abuse the Skreeans. A twelve-year old boy named Janner Igiby and his younger brother and sister, Kalmar (aka Tink) and Leeli, are the main characters, and the first book relays their adventures in Glipwood and the surrounding area, and their involvement with the Fangs and other characters, both friendly and evil. In the end they learn that they are the royals heirs to the lost Kingdom of Anniera, and that they are the whole reason why the Fangs invaded Skree. In North! Or Be Eaten... the Igiby family travels north to escape the Fangs, but encounter many hideous dangers along the way, ending up rather worse off than they started. The Monster in the Hollows finds the family a safe haven in the Green Hollows - except that they appear to have brought their troubles with them and come closer to danger than ever. "The Warden and the Wolf King" breaks on the scene of open war, and mostly details the children's last attempts to save the world, interspersed with lots of backstory, leading up to the unexpected grand finale(s).

In all, the series has a satirical air to it, often inserting random facts about Skreean culture or wildlife (of which there are many dangerous specimens) or purposefully making redundant, humorous, or ironic statements, even during times of suspense and danger. Despite this, nobility of character is carefully prized and recognised. As a Christian author, Peterson frequently weaves in themes of redemption, submission and hope, as well as Christian principles for relationships.