Film / Bed and Board 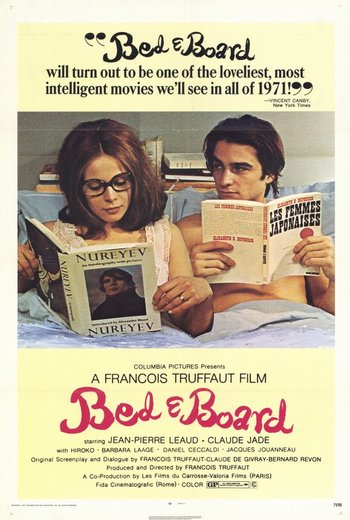 Bed and Board (Domicile conjugal—"marital home") is a 1970 film directed by François Truffaut.

It is the fourth of five films in the The Adventures of Antoine Doinel film series. Antoine Doinel (Jean-Pierre Léaud) is now married to Christine, the woman he wooed in the previous installment, Stolen Kisses. They are living in a small apartment in Paris, Antoine selling flowers from a downstairs stand, Christine taking in violin students. Antoine lucks into a cushy job, and Christine gets pregnant. They have a baby boy.

However, this domestic bliss is disrupted when Antoine becomes infatuated with a Japanese woman named Kyoko, and starts an affair. Will their marriage survive?

The Antoine Doinel series concluded in 1979 with Love on the Run.