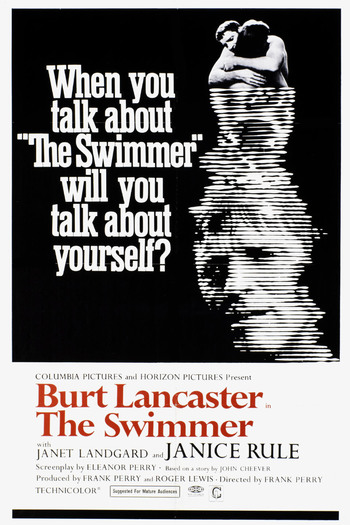 "You see, if you make believe hard enough that something is true, then it IS true, for you."
— Ned Merrill
Advertisement:

A surreal 1968 drama directed by Frank Perry and an uncredited Sydney Pollack, starring Burt Lancaster, based on a 1964 short story by John Cheever.

One beautiful summer's day in Connecticut, middle-aged Ned Merrill unexpectedly drops by the house of some old friends as they're having a pool party. During their conversation about various mutual friends in their suburban neighborhood, Ned realises that the pools in their various backyards form a "river" leading directly to his own house, and decides on impulse to "swim" his way home by taking a dip in each pool. As he travels from house to house, however, it gradually becomes apparent that not everyone is pleased to see him, and that Ned's charming, enthusiastic outlook might be concealing the fact that things have gone terribly wrong for him...

First film score for Marvin Hamlisch. Joan Rivers appears briefly as a party guest who is intrigued by Ned. Director Frank Perry was fired after a screening of the first cut and replaced by Sydney Pollack, who directed much of the released film, including the entire scene with Ned and Shirley (Janice Rule).