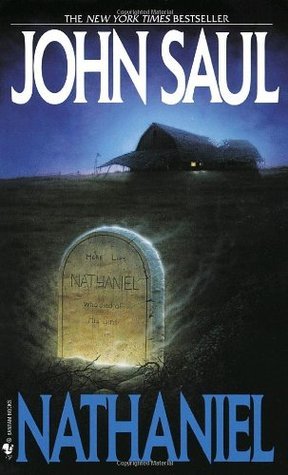 You could say this property is a bit of a fixer-upper...
Advertisement:

Nathaniel is a 1984 horror/mystery novel by John Saul. It tells the story of Janet and Michael Hall, the widow and preteen son of Mark Hall, who died under mysterious circumstances while visiting his home town of Prairie Bend: a place he had not been to since before he and Janet were married.

At the urging of Mark's parents, Anna and Amos, Janet and Michael relocate from New York to Prairie Bend and with the help of the elder Halls and their neighbors, begin restoring Mark's boyhood home to live in. Soon, however, Janet begins hearing legends of an evil spirit named Nathaniel, rumors that babies born in the town are quickly murdered; and her son Michael is beginning to act very, very strangely...