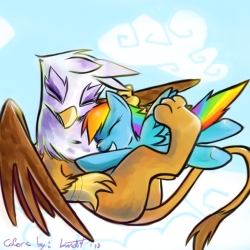 Dash and Gilda in happier times.
Heart of Gold, Feathers of Steel

is a My Little Pony: Friendship Is Magic fanfiction by Nicknack

Three years ago, at Junior Speedsters Flight Camp, Gilda and Rainbow Dash were friends. The years since then haven't been kind to Gilda. Maybe a trip to see her old friend will help resolve some things...

Heart Of Gold, Feathers Of Steel retells the events of Griffon the Brush Off from Gilda's perspective, as well as the story leading up to it and the immediate aftermath.

Has a sequel, Summer Days and Evening Flames.