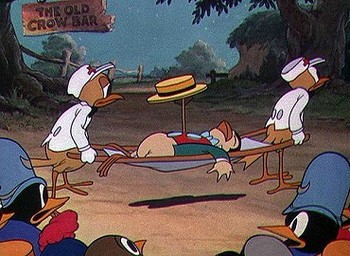 Who Killed Cock Robin? is a 1935 animated short film (8 minutes) from Disney, one of the Silly Symphonies. It was directed by David Hand.

Unsurprisingly, it is based on the traditional nursery rhyme "Who Killed Cock Robin?

". Cock Robin is serenading sexy Jenny Wren when he's shot by an arrow, tumbling from a tree branch to the ground. All the birds of the forest then launch a comic trial set to music, with an owl for a judge, in which they set out to discover who killed Cock Robin.