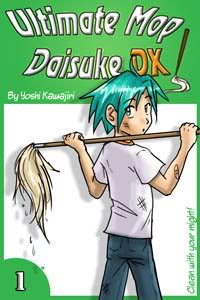 Ultimate Mop Daisuke DX is an Affectionate Parody of Shōnen manga and anime that began as part of the Anime News Nina comic strip at Anime News Network. It has also been mentioned at other sections of ANN, especially during April Fools' Day. The premise: Daisuke trains to be the world's greatest janitor.