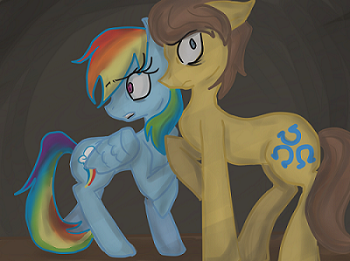 Will we ever see these two together? Probably not.
Advertisement:

A My Little Pony: Friendship Is Magic Fanfic by EminenceGris, found here

A lot of words describe Rainbow Dash. Athletic. Lazy. Brash. But her main problem stems from how others assume that list includes fillyfooler. After her big date is ruined by this stereotype, Rainbow dashes off to collect her thoughts.

A very different set of words describe Caramel. Meek. Introverted. Undervalued. His main problem is that when others don't think of him as unimportant, he's a pedophillic coltcuddler. But after two chance meetings in the Sweet Apple Acres fields and a bar, the new breakfast-buddies slowly learn to look past what others think about them.

Unfortunately, it appears to be a Dead Fic.