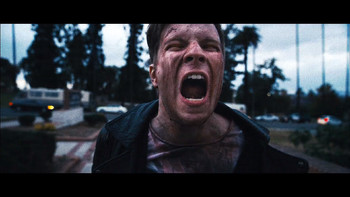 Never let it be said that four dudes from the Midwest couldn't inspire some genuinely creepy moments, especially in their music videos!

In order for Nightmare Fuel tabs to survive, a new writing style is going to be used, nicknamed Example Lobotomy. Basic rules: just list facts as they are, don't just say "character X" or "the X scene" (such zero context examples will be Zapped!), spoiler policy to be determined on a case-by-case basis, italics to be applied to works' names only and not to give emphasis on what tropers say. "X scared me" is already implied by the mere addition of that example by the troper.

Also, due to the high volume of Nightmare Fuel coming from the Youngblood Chronicles, please put Nightmare Fuel relating to the series of videos Fall Out Boy released for Save Rock and Roll into its respective folder. Considering how it is, we're gonna need all the help we can get.

open/close all folders
The Youngblood Chronicles

For Save Rock and Roll, Fall Out Boy set out to create a series of music videos for each track on the album, featuring the band being perused by a mysterious group due to their possession of a briefcase with glowing contents. Nobody could have ever expected just how disturbing this series became. (if the mentions of it on the main tropes page are any indicator).