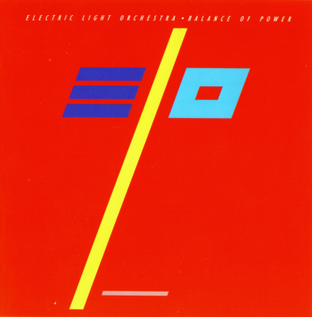 "Oh I know, it's strange. But I think that it's about to change."
Advertisement:

Balance of Power is the eleventh album by the Electric Light Orchestra. Released in early 1986, it's pretty much a Swan Song for the band's original phase — this is the last album to feature ever-present drummer Bev Bevan and, until From Out of Nowhere, the last to have keyboardist Richard Tandy on an official capacity.

After the Troubled Production and subsequent underperformance of Secret Messages, many of ELO's members largely moved on to production work. Jeff Lynne was more than ready to call it quits entirely, but, unfortunately, he was still under contract to release one more ELO album. Not helping matters was the fact that the orchestra was already disintegrating by the time... well... Time had been recorded, and after Secret Messages was released it had pretty much ceased to exist entirely. Lynne, having pretty much had more than enough of the ongoing Executive Meddling, subsequently got the trio of himself, Tandy and Bevan back together to put together the album his label was demanding with seemingly more of a focus on just immolating that contractual obligation so that they could all get out of there rather than creativity. The orchestra was definitely forgotten about by that point; with the "get this released and get out of here" mentality, they opted to take The '80s route of filling the tracks with electronic instruments. Hell, Lynne was so demotivated with ELO work at this point that he even recycled some tracks cut from Secret Messages because of, yes, you guessed it, more Executive Meddling.

The result was largely what you would expect.

Okay, the album didn't totally flop — it wasn't an Epic Fail on the same scale as, say, The Clash's Cut the Crap, plus it did spawn some singles that performed quite well (notably "Calling America"). It did however return unspectacular reviews and an even more unspectacular performance in the charts. Naturally, many fans and critics alike to this day see it as their weakest release. It is worth pointing out though that the band didn't instantly call it quits after this album was released; they embarked on one last tour during 1986 and it was only after that wrapped when ELO was finally packed up and stored away until the Turn of the Millennium, while Lynne focused on production work with George Harrison's Cloud Nine leading up to forming The Traveling Wilburys.