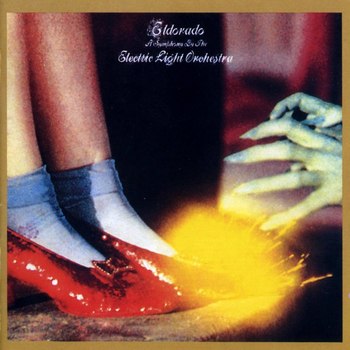 "And I will stay. I'll not be back, Eldorado."
"The dreamer, the unwoken fool,
In dreams, no pain will kiss a brow.
The love of ages fills the head.
The days that linger there in prey of emptiness,
In burned out dreams.
The minutes calling through the years.
The universal dreamer rises, now upon his earthly burden.
Journeys to the dead of night.
High on a hill in Eldorado..."
— "Eldorado Overture"
Advertisement:

Eldorado: A Symphony by the Electric Light Orchestra is the band's fourth studio album, and was released on 28 September 1974. It follows the theme of a man journeying through dreams to escape the tedious aspects of his mundane life. Its song "Can't Get it Out of My Head" then got released as a single, where it reached the #9 position in the United States, the first ELO single to reach the Top Ten.

Walking on a wave she came, troping as she called my name, and I can't get it out of my head:

"The dreamer, the unwoken fool,
High on a hill in Eldorado..."
—"Eldorado Finale"