Music / Philemon Arthur and the Dung 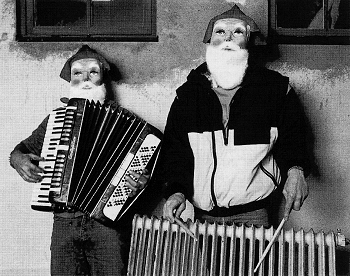 The only known photograph of PA&TD. (Maybe.)
Philemon Arthur and the Dung is a mysterious Swedish folk group that attained nationwide cult status way back in the '70s after their first album received an award for "Best Group Production" at the 1972 "Grammis" (Swedish equivalent to the Grammys) award show. The fact that a "no-name group" utilizing an absolute minimum of studio equipment were able to compete with established artists stirred such controversy that the award show was cancelled for over a decade. The group declined to appear at the award ceremony itself, instead forwarding a tape containing their award speech, to be played on-stage.
Advertisement:

Indeed, the identities of the group's members (ostensibly a duo, but there are some indicators this may not be the case), known only by the pseudonyms "Philemon Arthur" and "The Dung", remain unknown decades later; they resolved to keep their identities a secret to protect their unnamed hometown in the county of Scania from being hassled by media and the like. By all accounts, the only ones privy to their true identities are their record label and a select number of confidantes. This has raised numerous Epileptic Trees regarding their true identities, ranging from obscure and unlikely to strangely plausible.

As to their music itself... recorded chiefly in the living room of "Philemon Arthur", their output shifts between the bizarre and the vulgar, to the poignant and touching, with massive overlap. Subject matter is as likely to be about strange animals, hangovers and mowing the lawn as it is social and political commentary on the escalating expenditure of natural resources, hunting for sport, and sadism. Most songs are accompanied only by an out-of-tune guitar, accordion, or violin, and "The Dung" on a custom-built percussion kit of household objects.

Tropes associated with Philemon Arthur and the Dung: