Recap / Futurama S 6 E 14 The Silence Of The Clamps 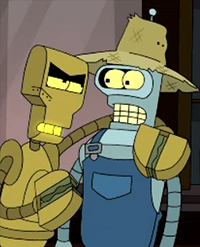 After testifying against the Donbot in court, Bender is forced to enter the Witness Protection Program. To find Bender, Donbot has Clamps join Planet Express, expecting Bender and Fry to make contact.