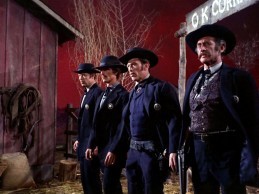 This one's a bit different.
Advertisement:

The Enterprise has been sent to make contact with the reclusive Melkotians. As it approaches their planet, a glowing object intercepts the ship and a booming voice warns the crew to go no further. Kirk reminds Spock that they were given "very clear" orders to establish contact with the Melkotians "at all costs", and decides to press on.

The disembodied brain with Glowing Eyes is not happy about being disobeyed, so he sends Kirk, Spock, Bones, Scotty and Chekov to The Wild West. Or at least, The Theme Park Version. It looks like it's made of tossed away scraps from a Western film. (It probably was.) The buildings are little more than facades. In the saloon, there are no walls, yet a clock and a G-rated version of Ingres' La Grande Odalisque are suspended where walls should be. Ed The Bartender, Johnny The Sheriff and Sylvia the Soiled Dove all seem very real, though. Kirk and co find that their phasers are now old-fashioned six-shooters! What's more, they come to find this isn't just any old west town. They're in Tombstone, Arizona and the date is October 26, 1881. And everyone seems convinced that Kirk and crew are the Clanton gang and they have a date this afternoon at 5 at the O.K. Corral with the Earps.

How can they avoid this date? If they can't, will they survive? And does Chekov stand a chance of getting laid?

Spectre of the Tropes: