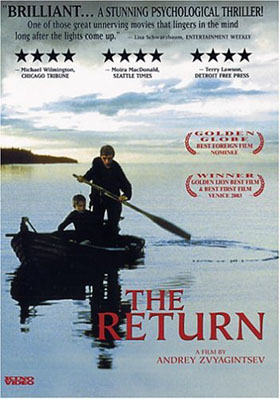 There are actually three main characters in this movie, but this image only shows two of them: Ivan (left) and Andrei (right). Their father, as usual, is nowhere to be seen.
Advertisement:

A 2003 Russian film directed by Andrey Zvyagintsev, The Return tells the story of two brothers — 15-year-old Andrei and 13-year-old Ivan — and the fishing trip they take with their father. Oh, did we mention that the father has been absent from their lives for the past 12 years and abruptly returned the previous day under somewhat vague and shady circumstances?

The two brothers are initially excited at finally being able to get to know their Dad. Ivan, however, quickly begins to develop second thoughts (possibly thanks to his mother's grave composure at both the father's return and at the upcoming trip). These second thoughts give way to hostility and fear as the generic fishing trip turns into a lengthy quest to a remote, mysterious island. What is so special about this island? Does their father have ulterior motives? Is he a criminal? Did their mother know what he was really up to before okaying the trip? Are their lives in danger? The brothers debate these questions amongst themselves up until the film's climax.

As interesting as these questions are, the movie is less concerned about them and more interested in using them to explore the dynamics of father-son relationships. This was a subject very close to the heart of the director, whose own father disappeared from his life when he was a child. There is a story, mind you, but this is one of those cases where plot takes a backseat to theme.