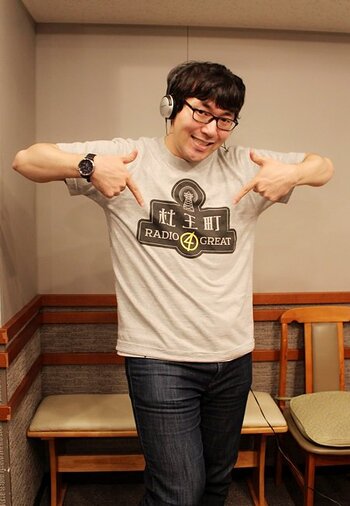 "This is Japanese Lunch Time Rush!''

.....
It's Yuki Ono's description...!! (by a random lurker)
But before you describe me even further, I ask you this... What will you do once you've known of me?

Yuki/Yuuki Ono (born June 22, 1984) is one of the more popular voice actors since 2011. His most popular roles is of the Tsundere bookworm Kaname Tsukuhara in You and Me, Taiga Kagami in Kuroko's Basketball, and Josuke Higashikata in JoJo's Bizarre Adventure: Diamond is Unbreakable.

He's starting to become increasingly known for his colorful plaid shirts, and sporting bow-ties of all colors of the rainbow to make them fashionable again. In 2017, he revealed that he's actually married since 2010

but he only recently announced it because his wife is not from the entertainment industry. He announced the birth of his first child, a baby boy, in August 2020.

In Granblue circles, he's quite well known in his roles, the english said by Sagittarius ("AMAZING!") and obsession with amassing Gislas (a powerful and rare gacha weapon) to levels beyond that which a sane player would want. It reached the point of causing a character (Kolulu) to be made in the game.

Not related to Daisuke Ono, Kensho Ono, Kenichi Ono, nor Yoko Ono; though he has worked together with the former two. Not to be confused with a Yuki-onna.

I dare you to make light of Yuki Ono's roles!