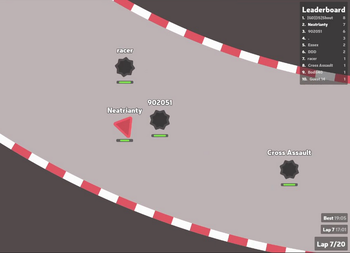 Three Hazards teaming up to take down a racer.
Driftin.io

is a multiplayer racing Web Game, created by Sidney de Vries on 18th of August, 2016. In it, up to ten players per match choose one out of eleven highly abstract-looking racing vehicles and start racing, earning upgrade points every time they either successfully complete a lap, or wreck another player.
Advertisement:

The round ends whenever one player manages to complete 20 laps; however, if they get wrecked, either through crashing into the walls or through getting rammed by other players, they have to start accumulating laps all over again.

Has a short wiki to explain the basics here