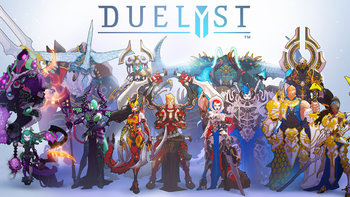 What do Hearthstone, Final Fantasy Tactics and Chess have in common? This game.
"Competitive turn-based strategy card game!"
Advertisement:

Duelyst was a Free-to-Play Card Game and Turn-Based Tactics hybrid created by Counterplay Gaming and released on April 27th 2016. Its development, which lasted an entire year, began with [[funding

and the trailers can be found here: gameplay trailer

Focused on 1v1 online competitive matches, the turn based play and squad development on a 5x9 board, is reminiscent of Final Fantasy Tactics and The Banner Saga. However, it is also a card game as the minions, spells and artifacts that compose your squad are displayed in card form, much like Hearthstone: Heroes of Warcraft. It had rarities of cards, booster packs, a collection, Ranked mode (Seasonal) and Draft/Arena mode (Gauntlet), factions (classes) and emotes like in Hearthstone, but plays out more like Chess in the actual matches. Like in many table top games, you control cards (characters) represented by 2D moving pixel sprites, reminiscent of 16-bit era games, however the board, interface and backgrounds have simple 2D graphics reminding the player of RTS user interfaces or mobile games design.

Unfortunately, the game's servers were shutdown on February 17th, 2020, and the game is no longer playable.

For comparison check out Hearthstone: Heroes of Warcraft, Magic: The Gathering, and ShadowVerse.