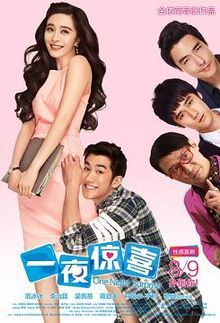 One Night Surprise (Chinese: 一夜惊喜; Yi Ye Jing Xi) is a 2013 romantic-comedy film directed and written by Eva Jin, and features Fan Bingbing, Aarif Rahman, Pace Wu, Jiang Jinfu and Daniel Henney. Michelle (Fan) is a 32 year old career woman who seemingly has it all: good looks, and a career on the rise. However, the bachelorette finds herself pregnant about 40 days after her 32nd birthday bash (where she cosplayed as Marie Antoinette and had a memory blackout from the alcohol binge). She then sets out to find the father of her child; the suspects include Bill Zhou Bi'an (Henney), her boss and Tony Zhou Tongyu (Aarif), her subordinate. Along the way, Michelle starts to question her priorities in life and realises that perhaps, chasing her personal dreams may bring her more happiness than her current lifestyle....