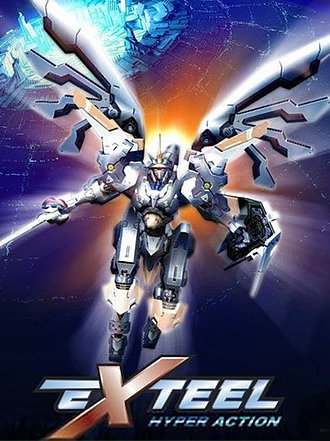 "Once we were united against a common foe. Now we are bathed in the blood of our own families."
— Divided We Stand
Advertisement:

Released on December 4, 2007 by NC Soft's E & G Studios, Exteel (known in China as G7 Online) was a Korean massively multiplayer online third person shooter, similar to Gunz and its "Hong Kong-syle gunplay" but with Humongous Mecha. The game ran for almost three years before NCSoft abruptly shut it down on September 1, 2010.

The present time for Exteel is A.D. 2107. Thirty years ago, rebels from Mars, Saturn, and Jupiter fought against the Galactic Federation and lost. The vanquished were herded up and deported to another star system, where they settled on the planet Natha. There, on the continent Taryn, they built three nations; the Martians founded Marston, the Jupiter refugees founded Palamo, and the Saturnians founded Aiers.

Marston is the most militaristic and aristocratic of the former rebellious colonies. They were the last to fall to the Galactic Federation, and apparently the first to arrive on Natha, because their colonization of the planet wasn't a cakewalk. Forced underground by meteor showers at the time of founding, Marston has a highly industrialized society. On the other hand, the democratic nation Palamo fared much better, landing on a section of Taryn most ideal for farming, becoming a breadbasket of Natha. Aiers founded itself in isolation from the other two nations, and of the three boasts the best technology and scientific prowess. It has tried to remain neutral in all disputes that have cropped up since colonization.

Things went sour quickly. A section of Marston wanted independence from the rest of the country. Palamo assisted them, which Marston was not about to accept. Although this new fourth nation calls itself West Palamo, Marston doesn't recognize its independence, and this dispute brought the four countries very close to the brink of war. All it took was for one attack on a Marston outpost—for which they blamed Palamo—for full scale war to erupt.

The nations of Natha were forbidden by the Galactic Federation from taking military equipment with them when they colonized the planet, but there's more than one way to wage war. As Marston's home grown forces advance into Palamo, the four nations are hiring mercenaries to send to the front lines. The primary weapons platform used in this conflict are the agile Mechanaughts, with each of the four nations developing their own models on top of the ones available from off-world sources. That's where the players come in ...