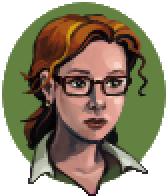 The series protagonist and player character. Rosa discovers she's the 3rd and latest spirit medium in the Blackwell family to be bound to the "Blackwell legacy" and spirit guide, Joey Mallone. 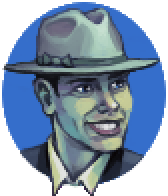 A ghost who serves as the spirit guide to mediums in the Blackwell family, having been bound to both Patricia and Lauren before moving on to Rosa.

Lauren Blackwell
"Infinity. I've been told it's beautiful, but I don't think it's anything special."
Voiced by: Dani Marco
Appears in: Unbound | Epiphany

The protagonist of Unbound, she was Rosa's predecessor as spirit medium.

Rosa's kind next-door neighbor, an older woman of Indian descent who lives together with her pet Boston Terrier, Moti.

An ancient spirit who appears to Rosa in her dreams.

Patricia "Pattycake" Blackwell
Grandmother to Rosa and mother to Lauren. She was the first Blackwell medium, but shirked her duty and went insane because of it.