(Left to Right) Dax, Isabella, and Gwen
A group of kids of Redacre who have banded together to combat the strange evil that lurks in their sleepy town. 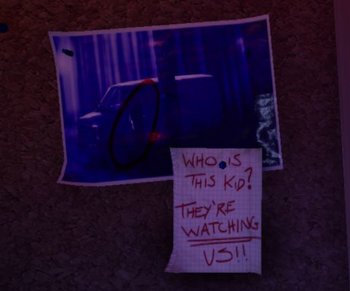 A mysterious lonesome kid who lives in a van in the woods and works against the Blackout club.
Sleepers 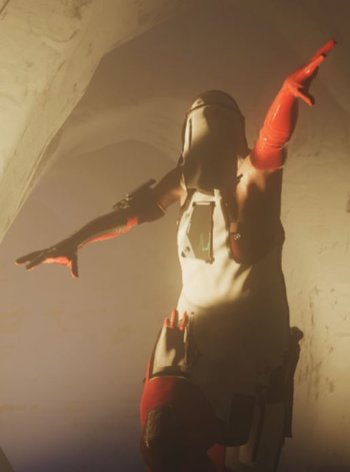 A Cult Sleeper
Adults who have fallen under control of a mysterious entity. They are asleep and as such are completely blind, but have extraordinarily exceptional hearing.
Lucids 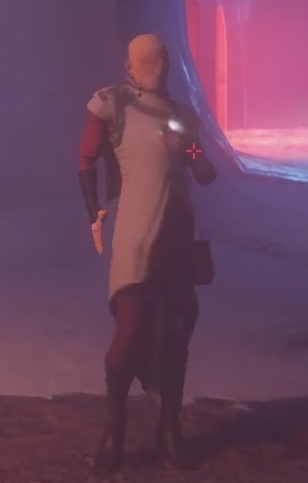 Like Sleepers, Lucids are also asleep, but are marginally more awake than their blind counterpart, though are still under control of a mysterious entity. They can see and are able to form coherent human speech. According to some ambient dialogue, they used to be Sleepers at one point. 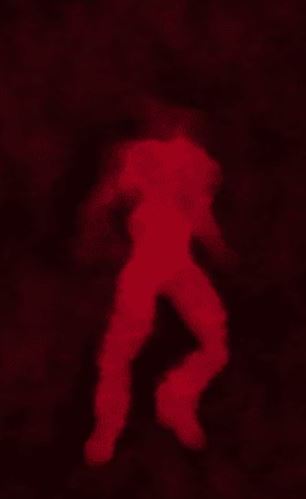 A strange and terrifying being that appears from the Red Doors scattered around Redacre. It cannot be seen with the naked eye, but instead can only be seen when eyes are closed.

A group of mysterious god-like entities who seem directly tied to what hangs over Redacre. The kids of the Blackout Club can communicate to them through prayers, to which they may or may not respond.
General Tropes
SPEAK-AS-ONE

A Daimon who seems to represent order and unity, but at the cost of one's own individuality.
THEE-I-DARE

A Daimon who seems to represent rebellion and risk-taking.
DANCE-FOR-US

A Daimon who seems to represent music and not being afraid.
LAUGH-LAST

A Daimon with fondness of pranks and bitter laughter in the face of inevitability.
IN-HER-TEETH

A Daimon focused on making peace with your own mortality.
DIE-FOR-YOU

A Daimon who seems to represent selflessness and sacrifice.
THE-MEASURE-CUTS

A Daimon who seems to represent knowledge and impassionate logic.
HUNT-THE-STRONG

A Daimon focused on achieving power through any means necessary and challenging stronger opponents.
SEED-THE-GRUDGE

A Daimon focused on instigating conflict.