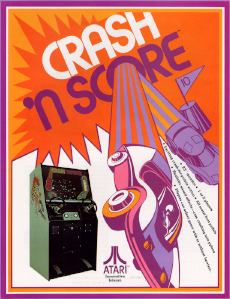 Crash 'N Score is a Driving Game from Atari, released in 1975, and the ancestor of the "Crash n' Score" games in Indy 500 for the Atari 2600. One or two players drive around a playfield. There are 16 pylons scattered around the playfield, with numbers on them from 1 to 7. One of the pylons flashes. Whoever runs over the flashing pylon scores points equal to the number on the pylon, then another pylon starts flashing. The other pylons just slow the players down. There are oil slicks scattered around the playfield, and if the players choose, there can also be barriers. The game ends when time runs out.