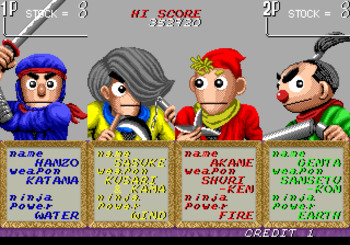 The Ninja Kids is a side-scrolling arcade Beat 'em Up made in 1990 by Taito. It received no ports until its inclusion in the Taito Legends Compilation Rerelease in 2005. The story is about an evil sect trying to summon "The Satan" on July 1999 (as foretold by Nostradamus), and only a group of four ninja can stop them.

Pretty standard fare for a videogame, except for the fact that almost every character is a puppet. No, not People Puppets, just regular (?) puppets. Everything about this game is very tongue-in-cheek, though, so it also can be seen as a Stealth Parody of typical cheesy brawler storylines and settings.