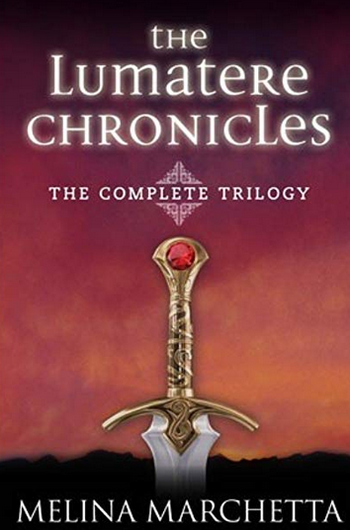 One day, acclaimed Australian author Melina Marchetta decided to write some High Fantasy. The Lumatere Chronicles was the result. Book one, Finnikin of the Rock, was published in 2009 and met rave reviews. The sequel, Froi of the Exiles, was released just before the summer of 2012, and the final book, Quintana of Charyn, was released in 2012.

Please note that the summaries for latter books can and will contain spoilers for earlier books.

Book one starts with a prologue explaining how It was the best of times in Lumatere. The kingdom was safe, wealth was abundant, and the people were happy. Finnikin of the Rock, son of Trevanion, leader of the King's Guard and best friend of both Prince Balthazar and Lucien, heir to the Monts, forms a pact with them to protect the kingdom- and is forced to watch as his entire life collapses: the royal family is murdered, the Forest Dwellers are slaughtered, an impostor king takes the throne, Finnikin's father is thrown into jail on accounts of treason and his beloved wife is executed. Angered by the carnage, Seranonna of the Forest Dwellers proclaims a dark curse, trapping the people of Lumatere inside. All that remains are a pair of bloody little handprints on the kingdom's door, presumably those of Bathalzar, the lost prince.

Fast-forward ten years, and we have the events of book one. The people who managed to escape Lumatere before Seranonna's curse are forced to live as exiles in refugee camps scattered throughout the continent. Finnikin and his teacher, Sir Topher, travel the continent in the hopes of procuring land for the exiles. One day, they're summoned to a camp of acolytes and are told that the novice Evanjalin can lead them to the lost prince Balthazar, but what they don't know is that Evanjalin's motives might not be as clear as they seem..

In book two, Froi, now fiercely loyal to Finnikin and Queen Isaboe, as well as a full-fledged citizen of the newly restored Lumatere, must travel to Charyn, the nation whose leaders originally orchestrated the assassination of the Lumateran royal family and the Bastard King's ascension to the throne. There, he meets the mad princess, Quintana, and comes to learn of dark secrets hidden in his blood.

Book three follows Froi, Arjuro, Lirah, Gargarin and Quintana as they attempt to put things to rights: Charyn is on the brink of civil war, Quintana and her unborn child are missing, Lumatere are out to kill Gargarin and Froi, torn between the people he loves and the people he owes his allegiance to, has no idea how to proceed...

The Lumatere Chronicles provides examples of the following tropes: