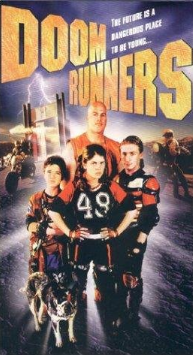 Doom Runners is a 1997 Made-for-TV Movie co-produced by Nickelodeon and Showtime.

Set in a post-apocalyptic future of an uncertain time, the story follows a group of young people (siblings Jada and Adam, bad boy Deek, Magical Girl Lizzie, and ex-soldier Vike) who trek across the dangerous wastelands to find "New Eden", a place where the unpolluted Earth of yesteryear still exists. However, they must also contend with the evil corporation led by Mad Scientist, Dr. Kao (Tim Curry), and his minions the Doom Troopers.

Unfortunately for those of us looking for a nostalgia trip, the film is not available on DVD, but there are a number of VHS copies floating around and it occasionally shows up on the Tubi streaming service.