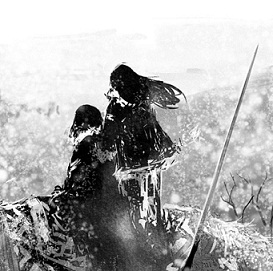 Style of Dan Kim
"Take it easy!"
- Dan Kim, Whenever Dan is lazy
"If you're in the area, it might be worth dropping by. Don't go out of your way, though."
- Dan Kim, Inviting everyone to go to the premier Canadian webcomics awards
Advertisement:

Daniel Kim (born 1983, in Toronto) is the artist and writer behind the Clone Manga collection of webcomics, which include April & May & June, Kanami, Nana's Everyday Life, Paper Eleven, Penny Tribute, H.H. and Tomoyo 42's Room. All of the content of these comics is geared towards a mature audience and, as the website's name suggests, are influenced by and sometimes directly refer to (even featuring characters from) manga and anime. He runs http://www.clone-army.org/

Ranging from loose, evocative, almost abstract images of otherworldly, haunting beauty to comics about carving up babies with chainsaws in order to attract readers, Kim's work can maybe be described as "unusual"; though there's no denying his uncompromising commitment to his own artistic vision.