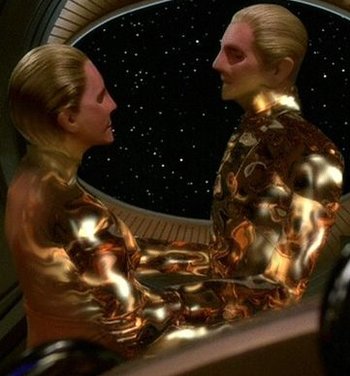 Pictured: Odo screwing the Female Changeling (and screwing all his friends over)
At Starbase 375, the crew of the Defiant are celebrating another successful mission. Sisko gives a Rousing Speech and ceremoniously places the ship's latest emptied phaser battery cell on display. Immediately afterward, however, he's promoted to Adjutant to Admiral Ross and removed from command of the Defiant. Starfleet has discovered a massive Dominion sensor array, which is a big reason why the war has been going poorly. Sisko comes up with a plan to attack the array through a dangerous part of space. But because of his promotion, Dax will be the one in charge of the Defiant.
Advertisement:

Meanwhile on Terok Nor, Kira and Rom are observing the fruits of their resistance cell antics. Rom has swiped a PADD from Damar containing his plan to poison the Jem'Hadar on the station should their dwindling supply of ketracel white run out. Rom made sure the Jem'Hadar found it, and a brawl soon erupts between them and the Cardassians. While Weyoun and Dukat try to figure out how this brawl came to pass, Odo on the other hand knows exactly what happened. He nixed the idea when Kira proposed it, worrying that it would put the security of the station at peril, but she and the rest of the cell went ahead anyway. Odo accuses her of being reckless, while she accuses him of prioritizing the station over the war.

Their argument is not helped by the arrival of the Female Changeling, who is trapped in the Alpha Quadrant due to the mines blocking the wormhole. She's forgiven Odo for his past transgressions and wants the company of a fellow shapeshifter. Odo initially keeps her at arm's length but can't help asking for more information about his people. She repeatedly suggests that they link to help him understand, and he eventually agrees. When Kira finds out about it, she's furious, but Odo assures her that he didn't give up her secrets, and she just wouldn't understand what the link is like.

Back on Starbase 375, Sisko is having trouble letting go of his command of the Defiant. While it's away on its latest mission, he intends to stay up all night waiting for news. Admiral Ross tells him he's now responsible for hundreds of ships and can't afford to be fixated on just one. When the Defiant returns successfully, Sisko watches as Dax gives the same Rousing Speech to the crew that he made before. He leaves with Ross to continue their work.

On the station, Damar arrives at Quark's looking to celebrate a breakthrough he claims will change the course of the war. After plying the Cardassian with free drinks, Quark arrives at Kira's doorstep very drunk and bearing Damar's secret. The barkeep relates what Damar said, and Rom quickly realizes that the man's plan will successfully take down the minefield preventing the rest of the Dominion's fleet from pouring into the Alpha Quadrant. Only by sabotaging the station's deflector array can they stop him. To do that, they'll need Odo to temporarily take the station's security offline at the exact right moment. They break to prepare for the next morning.

The next day, Rom enters the conduit with his tools and waits for the pre-appointed time, but when the moment strikes, Kira sees that Odo is not in his office. She rushes back to the conduit to stop Rom from tripping the alarm. Unfortunately, he already did, and he's promptly arrested. Kira angrily confronts Odo over his inaction. Oddly serene, Odo admits that he was linking with the Female Changeling and says that he now understands what it means to be a shapeshifter. When the shocked Kira accuses him of abandoning his responsibilities to the resistance, Odo states that such matters are no longer his concern. After she storms off, the Female Changeling arrives and asks if Kira's outburst disturbed him. Now totally under her sway, Odo blithely replies, "No, not really."