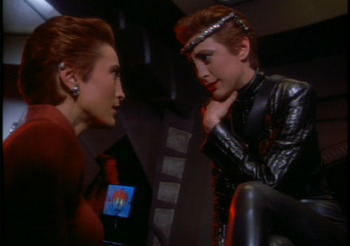 Kira is seeing double.
Kira and Bashir have an unusually rough trip through the wormhole on their way back to DS9, and emerge to find the station nowhere in sight. Things get even stranger when they are boarded by Klingons who are initially hostile but immediately become downright apologetic when they see Kira.
Advertisement:

They discover that they are in the Mirror Universe that Kirk and his crew discovered a century earlier. In this alternate universe, Kirk did successfully persuade Mirror Spock to reform the Terran Empire, but this made the Terrans easy conquest for The Alliance, a coalition of Bajorans, Cardassians, and Klingons. Deep Space 9 is still Terok Nor, under the command of Intendant Kira Nerys and First Officer Garak, and the Terrans are enslaved. Bashir is assigned to labor in ore processing under the watchful eye of the alternate Odo, but Intendant Kira takes an interest in her counterpart and spares her the same fate.

Intendant Kira is willing to entertain the idea of letting Kira return to the prime universe and gives her free run of the station, but for a lax bodyguard. Kira tries to get help from the Mirror Quark, but he is found out and executed, and she has less success with the Mirror Sisko, who was able to charm his way up to being Intendant Kira's enforcer in the sector. The Mirror Garak is willing to help her, if she'll help him overthrow Intendant Kira so he can take command. Bashir tries to get assistance from the Mirror O'Brien, but he's too cowed to offer any.

As the two Kiras attend a party with Sisko's crew, an emergency down in ore processing creates an opening for Bashir to kill Mirror Odo and escape. O'Brien agrees to help him and asks to return to the prime universe with him. They're caught and brought before Intendant Kira, who questions why O'Brien, a high-ranking slave, would betray them. O'Brien explains that he's heard Bashir's stories of the prime universe, and it inspired him to try for something better than this. Inspired by O'Brien's words, Sisko and his crew turn on Intendant Kira and flee the station. O'Brien joins Sisko's crew rather than flee the universe, while Kira and Bashir take their runabout back through the wormhole, their original Technobabble hiccup that caused them to enter the mirror universe still working to bring them back home.