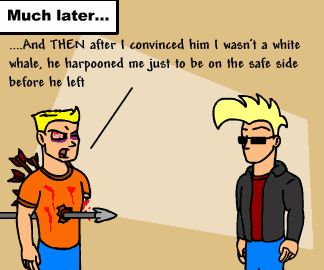 There's getting back-stabbed, and then...
"The rule for finding plots of character-centered novels...is to ask, "What's the worst thing that can possibly happen to this guy?" And then do it."
— Lois McMaster Bujold
Advertisement:

You have reached a writer's block. You've created a hero so righteous, noble, good and pure that traumatizing them just once is not convincing enough to break them. Yet you want the intended audience to still feel like they want to reach into your work and hug the character in question.

Hence the name of this trope. You get ready to write, and put on a hat with the name "Murphy" written on it, and think to yourself:

"If traumatizing a hero once can earn the audience's sympathy, then what better way to earn your audience's love for the character than to lay trauma after trauma on them like a falling row of dominoes?"

Having donned the hat of "Murphy", you, the creator of this fictitious universe, are entitled, nay, obligated to make sure that whatever can go wrong for your hero will go wrong. The effect is akin to the Chinese proverb of water continuously dripping on a rock: one drop won't even dent it, but a million will crack a boulder. In other words, having your hero lose everyone they love and/or have every dream unfulfilled and broken is the most realistic way to turn a God Amongst Men into a pathetic crying wreck.

The usual results of a Trauma Conga Line are:

This trope is a particularly vicious example of Break the Cutie, and is a gamble on the part of you, the writer.

Handled correctly, it will create the ultimate Iron Woobie so endearing that the audience will cry and cheer with him/her to the bitter or uplifting end.

On the other hand, one melodramatic violin-music-laced scene too many, and you'll have the Narm of the century.

See also Humiliation Conga, where this happens to a villain who deserves what's coming to him, and that's usually Played for Laughs while a Trauma Conga Line is rarely meant to be funny. Deus Angst Machina is similar and there is quite a bit of overlap, but with the Trauma Conga Line more of it happens on-screen than in the backstory.

Here Be Spoilers, Ladies and Gentlemen.