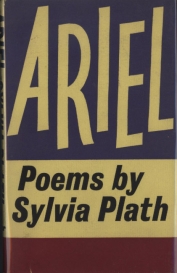 This is the light of the mind, cold and planetary.
The trees of the mind are black. The light is blue.
"The Moon and the Yew Tree"
Advertisement:

Ariel is a collection of poetry by Sylvia Plath. Published posthumously, it's her most well known work (well, that or The Bell Jar), and her most critically acclaimed. Ariel is generally regarded to be one of the most important books of poetry of the twentieth century.

Ariel was originally published in 1965, two years after Plath died, by her husband Ted Hughes. However, the contents of this edition weren't exactly what Plath wrote the contents were to be, and another version (called "The Restored Edition") was published in 2004, with Plath's original table of contents.