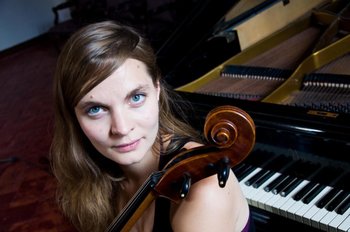 Hildur Ingveldar Guðnadóttir (born September 4, 1982 in Reykjavík) is an Icelandic musician and composer.

Coming from a family of musicians, she's a classically trained cellist as well as a singer, and she has collaborated with the likes of Pan Sonic, Throbbing Gristle, Múm, Stórsveit Nix Noltes, Animal Collective and Sunn O))) on albums and/or concerts. She also composes or performs soundtracks for films and television series since 2011.

She was friends and collaborated with a fellow Icelandic musician and composer, the late Jóhann Jóhannsson, on films of Denis Villeneuve most notably. 2019-2020 were particularly great years for her as her compositions for Chernobyl and Joker earned her much praise.

Her solo albums include:

Notable soundtracks of hers include: