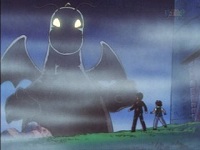 I just want to be friends!
You're always putting me down, but I'll show you! I'm gonna prove to you I can do it! I'm gonna be a Pokémon Master. Stand back and watch me work.
— Ash Ketchum

Ash and company travel onward. Ash brags about having caught 6 Pokémon, but Misty claims that all his Pokémon followed him (he caught two fair and square, but she is mostly right). Determined to prove himself he rushes to the beach and catches a small Krabby. He is shocked to see the Pokéball vanish before his eyes! Misty and Brock explain that he can only carry six Pokémon at a time and the extra went to the person who gave him his Pokédex, Professor Oak. Ash is afraid Professor Oak is going to eat Krabby and they rush to find a phone.

This brings them to a lighthouse where they meet Bill. Bill is a Pokémon researcher and longs to see a Pokémon that has been making mysterious sounds from the sea. Bill plays a recording of the sounds out of the lighthouse to attract this Pokémon. It shows up covered in shadow, but looks like an uncommonly large Dragonite (although no one recognizes it as such). Team Rocket, in the middle of scaling the cliff to the lighthouse, want the Pokémon for themselves and try to fire rockets at it. Unfortunately for everyone the Pokémon retreats into the night.