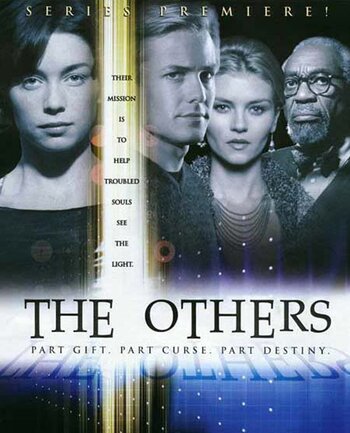 Paranormal Investigation series airing on NBC in the spring of 2000. Centered on Marian Kitt, a shy college student in Boston who discovers/is discovered by a small network of psychically gifted do-gooders. She herself was able to communicate with the dead, making her a prime recruit. She and the others (pun intended) were also targets of various evil supernatural forces.

The Others was created by John Brancato and Michael Ferris. Early on, The X-Files/Millennium (1996) veterans Glen Morgan and James Wong were brought in as showrunners. On the plus side, the pair had a playful approach to fantasy and horror conventions, as well as a strong stock company of actors. On the minus side, they had a proclivity to Shoot the Shaggy Dog endings, and oh how The Others got one.

Since the show's untimely end, several of the cast members have enjoyed some degree of success elsewhere. Julianne Nicholson, who played Marian, played Mike Logan's new partner on Law & Order: Criminal Intent. John Billingsley was Dr. Phlox on Star Trek: Enterprise. Gabriel Macht starred in the live action movie of Will Eisner's The Spirit, and currently stars in the USA Network legal drama Suits. Most amusing of all however, is that Zachary Quinto featured in a tiny role in the second episode.