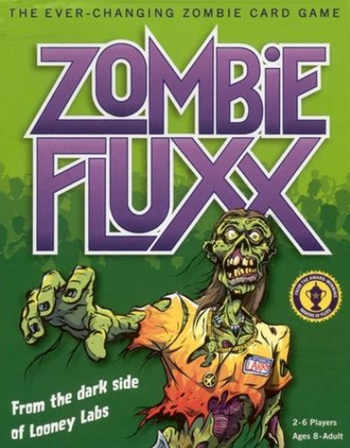 One of the many variants/expansions of Fluxx, this permutation themes itself as a zombie movie, where the Goals involve such things as boarding up the windows, escaping in your car, and stockpiling supplies.
Advertisement:

This was the version of the game to make Creepers (cards you are forced to play) a big part of gameplay, but in the spirit of the original game, shifting rules and goals mean that they can go from liability to boon very easily. Unlike the original game, getting rid of Creepers is more a matter of "how many you can kill" instead of when you do.

Many of the keepers not only fulfill goals, but can kill or attract zombies, meaning there's slightly more long-term strategy involved than the basic version.

Tropes included in this game: