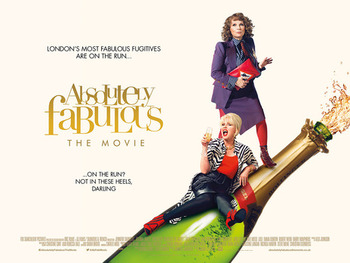 older, drunker, but not wiser
Advertisement:

The Movie of the popular BBC TV series. Edina 'Eddie' Monsoon's (Jennifer Saunders) PR business is on the rocks. Her only clients are Emma Bunton and Lulu and she is spectacularly behind with modern technology and social media. Her alcoholic fashion editor ('fash mag slag') best friend Patsy Stone (Joanna Lumley) is still in tow, and they continue to live the hardcore party lifestyle despite their age, and despite the fact that Eddie is close to bankrupt. Eddie's long suffering daughter Saffron (Julia Sawalha) has regained custody of her estranged daughter, Lola, and makes the mistake of leaving her in her mother's custody when going out for a date with her new boyfriend (Robert Webb). Eddie and Patsy take Lola out to the latest fashion event in attempt to secure Kate Moss as Eddie's latest client, and save Eddie's business, but an accident leads to Eddie knocking Kate Moss from a height, leading to the model being missing presumed dead. Eddie and Patsy realise they need to flee the country lest Eddie spend the rest of her life behind bars, and they escape to the south of France. Hilarity Ensues.

Not to be confused with the 2001 French film adaptation, Absolument fabuleux, starring Josiane Balasko as "Eddie" (the film's verion of Edina) and Nathalie Baye as Patsy.