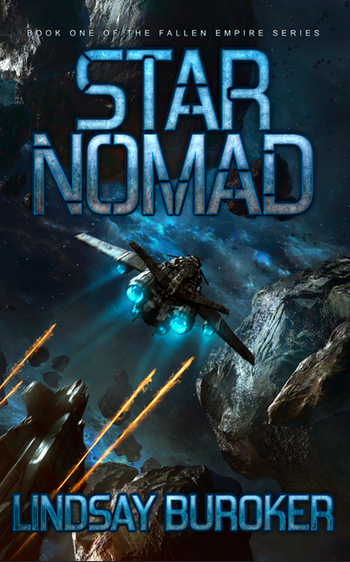 Gather around lads and lasses and let me tell you a story about an Evil Empire toppled by a heroic Alliance, which goes on to establish a new egalitarian republic for all.
Advertisement:

Well, this isn't that story. In Lindsay Buroker's Fallen Empire series (the first book is available on Amazon for free [1]

), the Tribus Solis System is in a state of disarray. The Tri-Suns Alliance has toppled the centuries old Sarellian Empire, but lacks the resources to assume control of the whole system. The Alliance controls three planets, the Imperial remnant controls one, and the remainder—the majority of the system—has fallen into a state of anarchy. Into this mess comes former Alliance pilot Alisa Marchenko, who seeks to reunite with her daughter Jelena. There's one small complication—Alisa is stranded on a poor, distant world and Jelena lives on Perun, the old Imperial capital and the one place the old regime holds sway.

And it turns out there are larger, otherworldly forces at work, forces that have a surprising familial connection to Alisa and her daughter...

The primary series consists of eight novels available on Amazon.com, listed below:

A spinoff series following the next generation of characters, entitled A Sky Full of Stars, has three novels out so far

The canonical series contains examples of:

The works created by other writers as part of Amazon's Kindle Worlds program contain examples of: