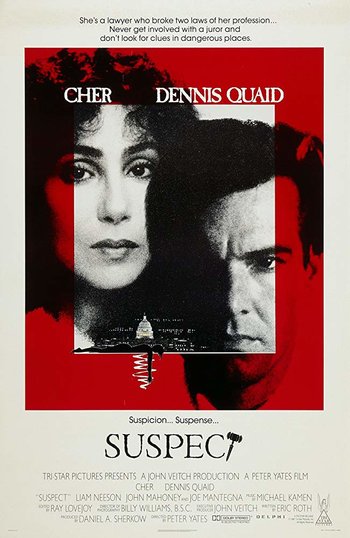 A 1987 film directed by Peter Yates and starring Cher, Dennis Quaid, Liam Neeson, John Mahoney, and Joe Mantegna, Suspect is a mix of a courtroom drama and mystery thriller.

In Washington, D.C. a week before Christmas, a Supreme Court Justice gives Elizabeth Quinn, a typist with the Justice Department, messages to deliver to some unnamed people and then kills himself after she leaves. Shortly after his death, Quinn's own corpse is found in the Potomac River. A homeless man (Neeson) living nearby is arrested for her murder after police follow the trail back to his abode. He is found to have slept in her car the night she was murdered, with her wallet on his person. The overworked public defender Kathleen Riley (Cher) is assigned to represent him on the murder charge.

The homeless man, it turns out, is named Carl Anderson, who is deaf and mute along with being a Vietnam veteran. Carl writes that he was simply sleeping in her car that night to get warm, and denies killing Quinn. Kathleen finds it hard to communicate with Carl, not only because of his disability but due to a hard personality built up over years of life on the streets. Over time, however, he begins to open up and tries to help her mount a defense.

As the case opens, agribusiness lobbyist Eddie Sanger (Quaid) is chosen for the jury despite his best efforts. He notices discrepancies in the prosecution's case, and illegally contacts Riley with his observations. Despite her reservations, she begins to investigate the case along with him, which soon proves to be much more than an ordinary murder...