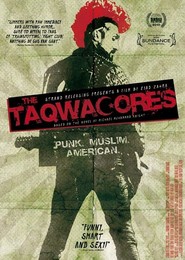 "We should go out West sometime, Yusef Ali. Get a van, make like an interstate jam'aat... And along the way we'd round up all the queer alims, drunk imams, punk ayatolahs, masochistic muftis, junkie shaykhs, retarded mullahs, and guttermouthed maulanas we can find, just load up a van 'til we can't fit no more and then have guys hanging' off the side like in Rawal-fuckin' pindi! Shit, man, down the 1-90. And it all ends in Khalifornia."

First a book by Michael Muhammad Knight, then a subculture, and recently a movie. In short: punk Islam - oxymoron, or two great tastes that taste great together?

In long: a group of young American Muslims from diverse backgrounds live and hang out together in cheap off-campus housing in Buffalo, New York (of all places). Yusef Ali, a straitlaced college student majoring in engineering because his parents told him to, moves in to what he expects will be a pretty standard all-Muslim flat.

Aside from the ... traditional Umar, the flat's home (either literally or spiritually) to a burqa-wearing Riot Grrrl, a Shia skinhead with KARBALA tattooed on his chest, a hashishiyun, a Flamboyant Gay, a white convert in short shorts, and most prominently, the messianic Jehangir who plays the call to prayer on a electric guitar and talks incessantly about a mystical taqwacore scene out West in "Khalifornia." After a dream where Jehangir meets Johnny Cash, he decides that his calling is to bring all the taqwacore bands from out west to Buffalo, to put together the Islamic punk concert to end all concerts.

Most of it is a coming-of-age story about young American Muslims struggling to find a way to reconcile their love of Allah (SWT), their cultural identity, and their belonging among the ummah with things like feminism and drinking beer.

The author of the original book had written it as a way of saying of goodbye to Islam, believing that the Islam he wanted to practice didn't exist. However, Muslims all over the country read his book, thought, "Hey, punk Islam. That sounds like a good idea." They learned to sing and play musical instruments (or not ... it is punk, after all), and voila, a Real Life taqwacore scene was formed. Many of the scene's most prominent bands, most or all of whom were inspired to start a band by the book, play in the movie. It's also a massively influential cult classic among young American Muslims in general.

The Taqwacores contains examples of these tropes: