"At times [the music] seems out of control; moving frantic, saying things you shouldn't. But [it] wears it well, and knows how to get away with it in public." -Godforbid

According to That Other Wiki, That Handsome Devil is "an American rock band hailing from Brooklyn, New York by way of Boston, Massachusetts." According to Orange Alert

, it's "a wonderful mix of Tom Waits, Gogol Bordello, and G. Love (if he decided to grow a pair and stop singing about basketball and lemonade)." According to Notable Music Co.

, it's "everybody’s favorite psychedelic-rockabilly-jazz-R&B-blues-surf band." According to frontman Godforbid, the band is simply "fringe pop." But one thing's for sure: whatever That Handsome Devil is, it's always a little bit deranged and a little bit alcohol-soaked, and its fans love the band for it.

The band has been featured in the Guitar Hero and Rock Band game series as well as on the TV series Weeds and Reaper. It tours across the United States mideast in a month-long bar crawl every August. 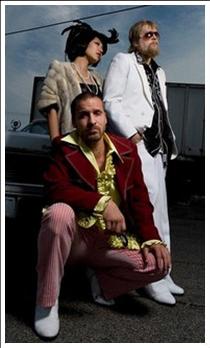 The music provides examples of: