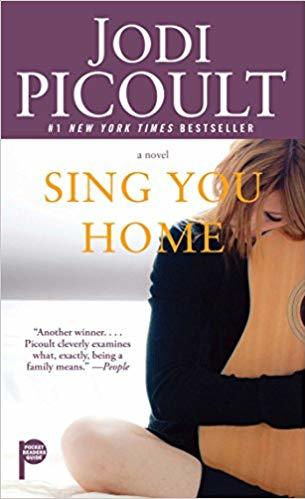 Sing You Home is a 2011 book by Jodi Picoult. Zoe Baxter has spent ten years trying to get pregnant, and after multiple miscarriages and infertility issues, it looks like her dream is about to come true: She is seven months pregnant. But a terrible turn of events leads to a nightmare — one that takes away the baby for whom she has already fallen; and breaks apart her marriage to Max. In the aftermath, she throws herself into her career as a music therapist.

When Vanessa, a guidance counselor, asks Zoe to work with a suicidal teen, their relationship moves from business to friendship and then, to Zoe’s surprise, blossoms into love. When Zoe allows herself to start thinking of having a family, again, she remembers that there are still frozen embryos that were never used by her and Max. Meanwhile, Max has found peace at the bottom of a bottle – until he is redeemed by an evangelical church, whose charismatic pastor, Clive Lincoln, has vowed to fight the “homosexual agenda” that has threatened traditional family values in America. But this mission becomes personal for Max, when Zoe and her same-sex partner say they want permission to raise his unborn child. This leads to a court case to decide who gets the embryos.