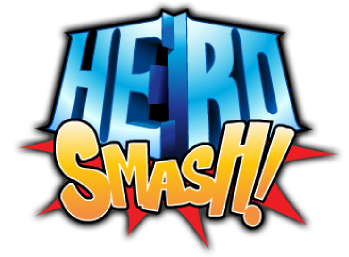 "Underpants on the outside... for JUSTICE!"
— HeroSmash tagline

HeroSmash is a multiplayer superhero game, and the third MMORPG from Artix Entertainment, and the second made by them. note EpicDuel was created by a different company, which was later bought out by Artix.

Originally called SuperHeroQuest until the folks at Marvel Comics complained, the game has only just been released and, as such, has relatively little story to speak of. However, a more detailed plot is likely to appear after further releases. The game is arguably even more bizarre than most of Artix Entertainment's other games, since it's set in an ultra-modern city...

You, as a new smasher in Super City, get involved in a massive war over the Pandorian Malachite stashed away in a statue of Pandora. A young girl, Demolicious, and her band of robot Divas valiantly defend the malachite against the robotic forces of Luigi Davinci. Sadly, she gets outnumbered and the MacGuffin falls into the villains' hands. To add insult to injury, villains have outnumbered heroes in all of the game's wars ever since.

Next, you're meant to convince Death to join either the heroes or the villains by performing four trials for him. He duels with the player after the trials, then decides not to get into smasher hijinks after all.

After Death's trials, the player has to stop the Clock Blocker from meddling with time and causing The End of the World as We Know It. And still nothing is done about the lost Malachite.

Afterwards, the plot just drops, and the game's pretty much in Development Hell as of 2012.