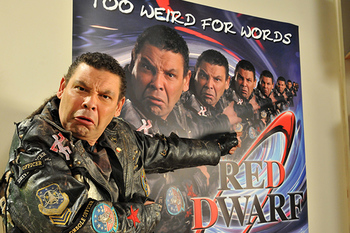 "Too Weird For Words".
Advertisement:

open/close all folders
Series I
The End

Thanks For The Memory

Gunmen Of The Apocalypse

Stoke Me A Clipper

Series VIII
Back In The Red

Lister: Kryten could not be more fried if he were a Mars Bar in Scotland.

The Promised Land
Other